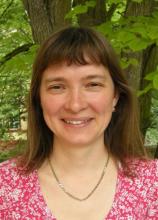 She was graduated in Szent István University, Gödöllő in 2000. Even in the same year she was employed in KÁTKI as scientific trainee then she got a position of assistant research fellow in 2001. She has been on maternity leave from 2004 to 2013. She is a mother of three children. At the present she participates in investigations on the genetic diversity of poultry species using different molecular genetic markers RAPD, microsatellite).